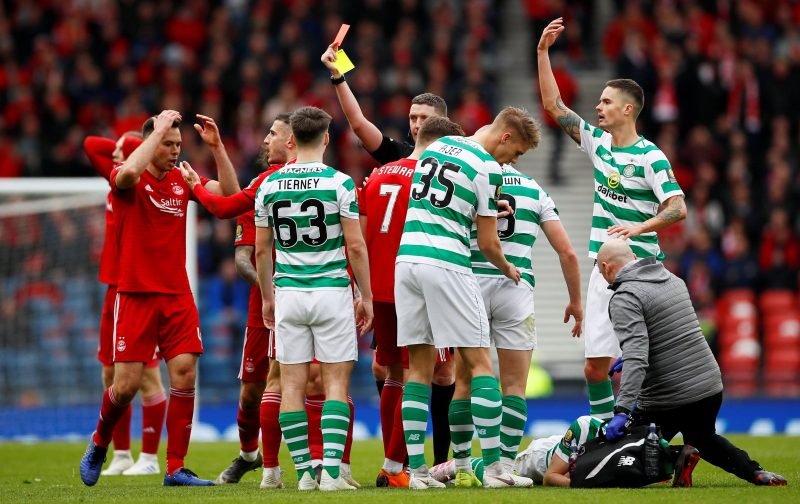 Neil Lennon’s Celtic are through to the Scottish Cup final after a convincing semi-final victory over Aberdeen at Hampden on Sunday.

The 3-0 win means the Hoops will now meet Hearts in May for the chance to win a ‘treble treble’ of domestic trophies.

An achievement of that magnitude would further solidify this Celtic side’s place in club history.

Goals from James Forrest, Odsonne Edouard and Tom Rogic provided the win, delighting supporters in the ground and watching on via television.

However, the fixture was marred by a horror high challenge on Ryan Christie by Dons defender Dominic Ball in the first half.

Fans were left fuming by the force and recklessness of Ball’s jump into Christie, with the Celtic midfielder requiring a stretcher after apparently losing consciousness on the pitch.

Ball was shown a second yellow card for the incident, but many felt it was deserving of a straight red, with some feeling the player could have done more to prevent colliding with Christie.

Straight red any day, their player had no chance of getting to that ball considering the height it comes from, he knows exactly where Christie is and leaves it on Ryan.

Dominic ball should be ashamed of the challenge he just made on Christie. Absolutely shocking if this was in the street it would be assault

Absolutely disgraceful challenge on Christie! IMO it’s no a second yellow it’s a straight red! Was not watching the ball was not even going for it! #ABECEL

A real concern that some of our pundits think that Ball’s assault on Christie was accidental. He knew exactly what he was doing & it shoulda been a straight red for the dirty bastard.

Absolute thuggery and common assault on Christie, then Ball has the cheek to moan about his red card ???? @CelticFC

There’s no way that Ball challenge was an accident. His eyes are fixed firmly on Christie.

It's horrible to watch that Ball challenge . They say 50/50 but Christie goes in for a header but Ball leads with his arm. It's absolutely clear in the video. Disgusting. Hope @ryanchristie2 is back soon.

What did you make of Dominic Ball’s sending off at Hampden? Have your say in the comments below…