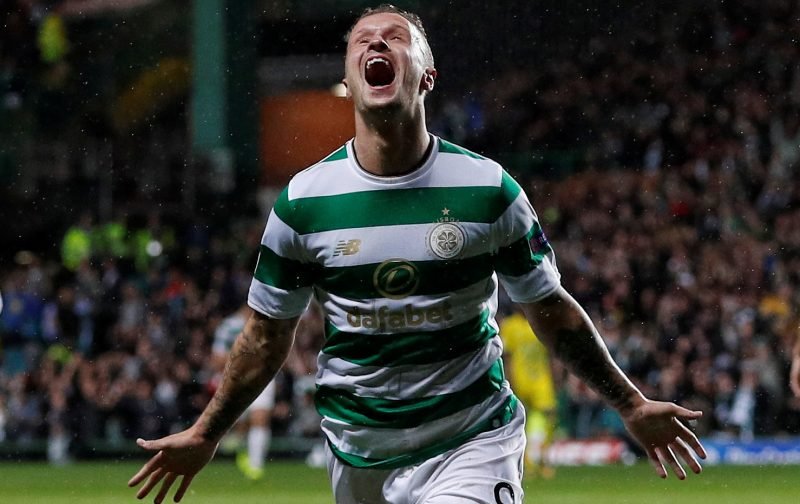 Former Scottish Premiership defender, Alex Bruce, has given Leigh Griffiths a back-handed compliment as the Celtic hitman continues his remarkable rehabilitation in 2020.

Speaking to Football Insider, the retired centre-half knows only too well what the striker is capable of and reveals just what the Scotland international is like to play against.

When asked for his verdict on the reformed goal-scorer, Bruce said:

“He’s one of them annoying strikers who doesn’t really do much in a game, a bit like a Jordan Rhodes kind of player where he just pops up with a goal and you think: ‘Bloody hell, didn’t even know he was playing.’”

“It’s a nice knack to have as a goal-scorer, a finisher, it’s how he’s earned his name so if he
chips in with a few goals, as he has done of late since he’s got over his personal problems, he’ll be an added bonus.”

Griffiths is a clever player and “economical” with his work-rate, he has never been the sort of striker that will press and harry and do all the donkey work up front, but in partnership with Odsonne Edouard since the turn of the year he has really shown what he is capable of, with the Frenchman’s movement and link-up play being key to the Scot’s resurgence.

He is a natural goal-scorer capable from anywhere outside or inside the box and offers a threat anywhere from 35 yards out from set-pieces as shown buy numerous spectacular efforts over the years.

The re-emergence of Griffiths has potentially saved the Hoops and Neil Lennon a fortune if they are to consider selling Odsonne Edouard, now that he is fit and firing on all cylinders again, 5 goals and 2 assists in his 8 games since the winter break show just how important he has become to the team once again.

He may have played second fiddle to Moussa Dembele and now Edouard but few would back against Griffiths stealing the headlines and leading Celtic to 10-in-a-row now that his troubles appear to be behind him and number nine is all but secured.