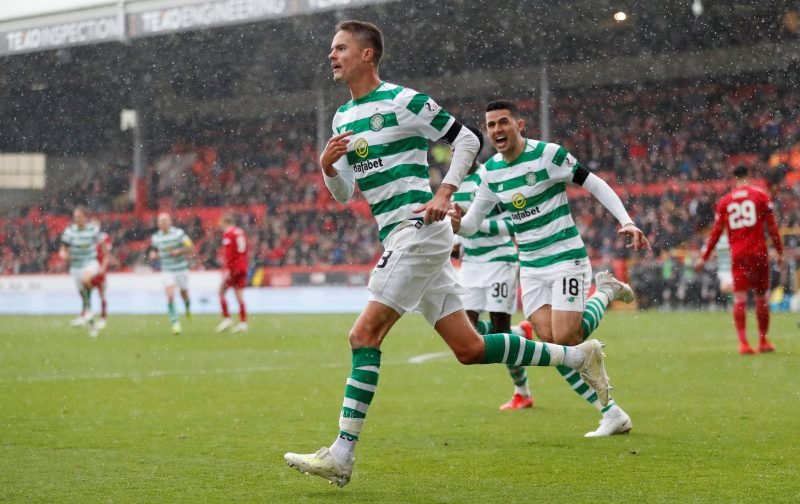 Needing just a point to secure the trophy, the Scottish champions demolished the home side at Pittodrie, eventually winning 3-0 thanks to goals from Mikael Lustig, Jozo Simunovic and Odsonne Edouard.

Lustig’s effort drew most of the plaudits, with the right-back latching on to a sumptuous low cross from Callum McGregor to stick a diving header past Joe Lewis.

It’s the kind of contribution we haven’t often seen from the Swede but he sent the away end into raptures and had Hoops fans going daft around the world.

He’s been criticising heavily over the last 18 months but has turned things around after the departure of Brendan Rodgers.

His contract is up at the end of the season but given his recent form, there are some who think he should be given a deal for another 12 months.

Here, what a servant Lustig has been to Celtic. Most people thought he was done, even brought in a right back to take over and the big mans back to his best. Unbelievable career at Celtic. pic.twitter.com/9c9zUIMa4P

How good was Lustig today? Worked hard all day. He’s been brilliant since the winter break Been the kick up the arse he needed. 100% deserves a new contract. He puts up with some amount of shite and he deserves to be here for 9 and 10 almost as much as Brown and Forrest do. ???????? pic.twitter.com/j8ZvNswnLC

What a run. What a header. What a goal. Forever love Officer Lustig https://t.co/7zHEVKsnMc

Lustig has been excellent since Lennon came in, been our most consistent player for a few months now ????????

Lustig a different player under Lennon.

Has Mikael Lustig done enough to earn a new contract at Celtic? Have your say in the comments below…