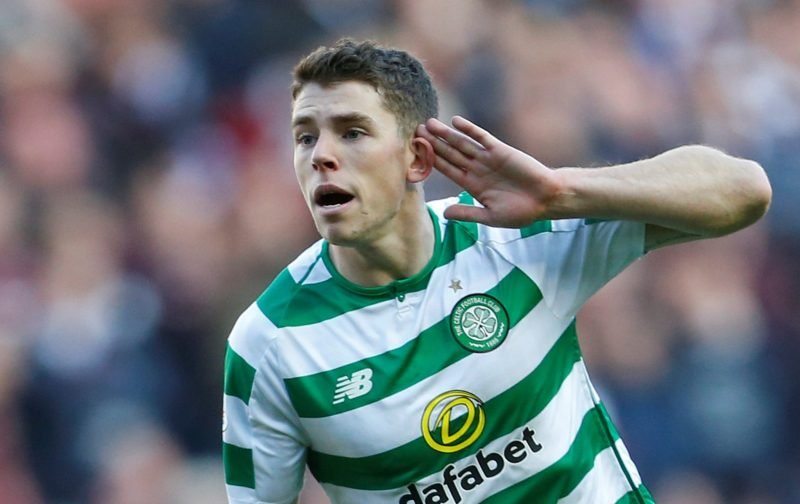 There was an inevitability about Stuart Armstrong leaving Celtic in the summer. After signing a short-term contract last year, it was clear he was looking for a career away from Glasgow, eventually moving to English Premier League side Southampton.

The main problem with that was the club’s inability to sign a direct replacement in midfield for the Scotland international. His direct running, finishing ability and composure really gave the side a cutting edge.

In recent matches though, a contender has stepped up to try and fill that void – Ryan Christie.

After his starring role against Hearts in the League Cup semi-final last week and a goal against Dundee at Dens on Wednesday, he followed that up with a similarly impressive showing on Saturday, again against Craig Levein’s side.

He’s taking the chances that Brendan Rodgers has handed to him and looks like a potential long-term solution to the gap that Armstrong left.

first time i’ve seen christie in 8 position like a faster more mobile armstrong. #ryanchristie he #scoresbelters but pity about the hair

One of the best part of today was our high intensity pressing , all over the pitch, that is what we lacked early in the season, so pleased wee Christie has taken his chance, I knew there was a Celtic player in him, he is actually filling the void that Armstrong leaving caused

Christie is the new Armstrong watch this space

I was saying the same thing to my mates, Christie is the Player to replace Armstrong.
Pace -Power-Goals. its all there and he is a young player. https://t.co/Lh2pWdRMx1

Chuffed to bits for Christie who has re-energised the midfield. The lads got some engine in the style of Armstrong/ Petrov and he gets it. Deserves a sustained run now imo

Talk about taking your chance when it comes, Ryan Christie deserves every bit of praise coming his way ???? WE ARE BACK AND THEY ARE TERRIFIED https://t.co/4lktwfXYmj

Does Ryan Christie have the quality to replace Stuart Armstrong’s previous Celtic contribution? Share your thoughts in the comments below…