BT and BBC pundit, John Hartson believes that the Scottish Premiership title is on it’s way back to Parkhead as Celtic continue to dominate since the return to actin following the winter break.

Speaking on BBC Sportsound (reported by The Daily Record) the Hoops hero is adamant that his former team hold all the aces as they look to secure 9-in-a-row.

When asked to give his opinion on Celtic’s current form and the lead they have managed to establish, he said:

“I think it’s Celtic’s title to lose, I really do, they’ve got themselves into a fantastic position since the new year, since losing to Rangers before the winter break.”

“They’ve come back absolutely flying, there’s a feel-good factor amongst the supporters.”I said two weeks ago I don’t think the Celtic vs Rangers games will define the title, both teams still may well drop points at some stage.”Rangers have already done that with the defeat to Hearts and the draw with Aberdeen. It’s all well and good saying ‘we’ve got two Old Firms coming up’ but Celtic will want to bounce back and prove a point in them.”

“I think it’s Celtic’s to lose, but there’s still 13 games remaining and 39 points to play for. No-one wants to give an inch away at the minute.”

Simply put, yes, not only do Celtic have a numerical advantage, they also have nine years experience of winning trophies and three years of absolute dominance – they know how to win.

It is the major difference between the two sides, one has been over the line many times whereas the other hasn’t even had a glimpse of the line they have been so far away from it.

Celtic – other than the December defeat to Rangers – have only lost one domestic fixture all season and in that game Ryan Christie was sent off in the first-half. Despite not being universally popular when he took over, Neil Lennon has his side performing to the same levels as Brendan Rodger’s “Invincibles”. 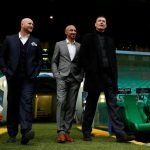 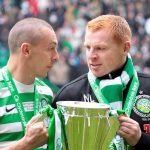 Rangers have closed the gap but when it was needed the most, Lennon’s side have put their foot firmly on the accelerator and are cruising into the distance – destination, 9-in-a row and an unprecedented fourth successive domestic treble.