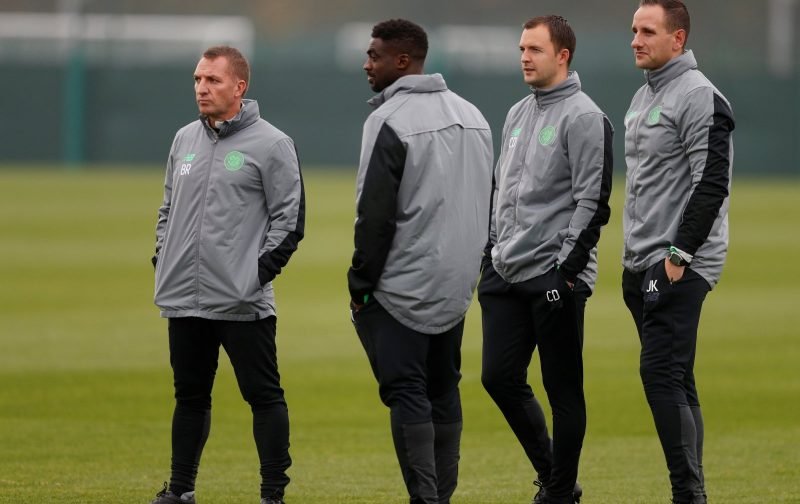 Hoops coach John Kennedy believes Brendan Rodgers is preparing for life at Celtic next season despite speculation linking him with an exit, as reported by The Daily Mail.

After the sacking of Claude Puel, reports have been numerous this weekend that Leicester City could be preparing to make a move to appoint the manager, with Rodgers said to be tempted.

Speaking before today’s win over Motherwell, he refused to comment and insisted he is focused on Celtic, but the whole situation is causing a big of anxiety amongst supporters.

The comments of Kennedy should hearten some though.

As quoted by The Daily Mail, he’s insisted that he’s seen no change in the way the manager is preparing for next season:

There has been nothing said that would suggest Brendan isn’t going to be here. Brendan just gets on with his job. I remember the chat at some point last season was that if he got a second Treble, an English team would come calling and he’d be gone.

We’re getting to that point in the season again and these stories will surface in the run-in. From working with him, he’s in a very good place. He’s a terrific manager who will hopefully be successful again this season.

His full focus is with Celtic and the way I see it he is preparing for next season, just as he did last year and the year before.

Given some of the speculation and commentary splashed across the newspaper pages over the last 24 hours, it’s nice to actually hear an informed opinion from someone who spends time with Rodgers on a daily basis.

He does not directly say that the manager will be here next season, but you’d have to say he is at least confident his head has not already been turned towards an immediate exit.

Rodgers wants to win trophies this season and what happens beyond that is anyone’s guess right now, but fans can at least be comfortable in the knowledge he isn’t heading off imminently.