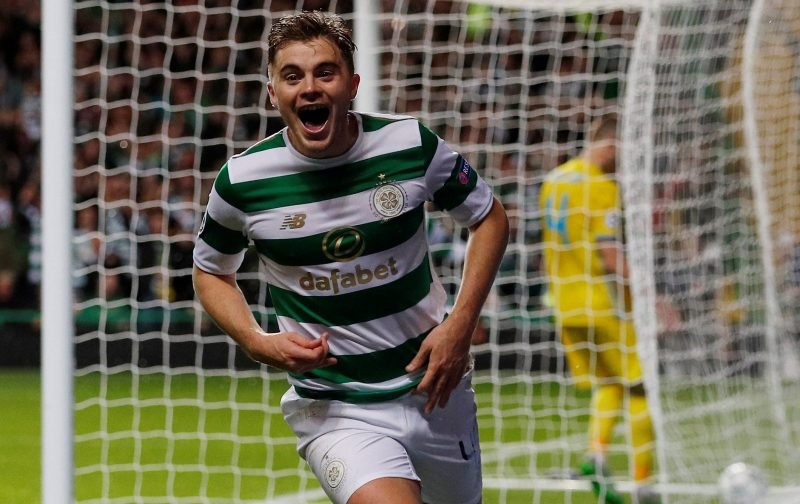 James Forrest has less than 12 months left on his current deal at Celtic, but he’s confirmed he wants a new contract to extend his playing career at the club for as long as possible, as reported by The Scottish Sun.

The winger has emerged as one of the most important players in Brendan Rodgers’ side over the last 18 months.

Last term was his best yet in green and white, scoring 17 goals and creating 10 assists, his best ever single season direct goal contribution since making the breakthrough into the first team at the age of 18.

He has started the 2018/19 season in lethal form too, scoring in both legs against Armenian champions Alashkert and creating a phenomenal five goals in the three European matches so far.

Now 27 years of age, he’s thinking about his future and it most definitely involves Celtic.

Speaking to The Scottish Sun, the Scotland international said:

I’ve been here since I was nine. I think as you get older you really do appreciate it more and I just want to keep working hard and be here for as long as I can — that’s what I want.

I think I’ve changed my game, and scoring a few more goals like last year has definitely helped.

Can I beat last season’s total? I’ve not really thought about it.

The position I play, the manager always says you need to be contributing with goals and assists.

Forrest signed his last contract in August 2016 after protracted negotiations. At one point it looked like he might leave the club permanently after a frustrating season in Ronny Deila’s squad, but Brendan Rodgers has turned his career around.

It would be fantastic to see him commit his future to the club as soon as possible.

Do you want James Forrest to sign a new deal? Let us know in the comments…