Confirmed: Celtic are set to open contract talks with midfielder, Rodgers wants him 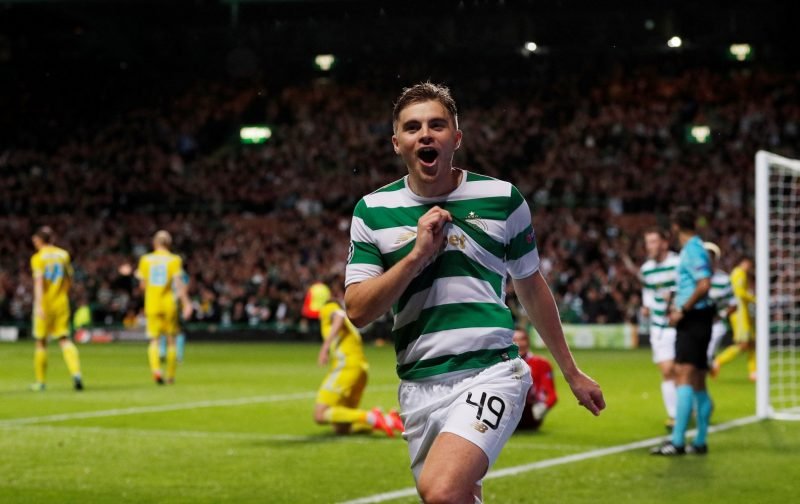 Celtic midfielder James Forrest has less than a year left on his contract at Celtic, but Brendan Rodgers believes the club are set to open discussions on a longer stay.

The 27-year-old has emerged as one of the club’s top performers over the last 18 months, weighing in heavily with direct goal contributions and also showing the work ethic to perform defensive duties more consistently.

In the three matches so far this season he has already scored twice and assisted five times, set to have a stellar 2018/19 season.

Speaking ahead of the club’s trip to Norway this week, the Celtic boss confirmed that the winger is a player that he would love to keep and says the negotiators at Celtic are set to open talks on a new deal.

As quoted by STV, Rodgers said:

In terms of James, he’s clearly a player we’d love to keep. He’s been outstanding in my time here, not just in games but in training too.

You can see how much he wants to improve and I think his best years are still ahead of him so I’m sure the club will be working with James representatives to tie him down to a longer deal.

That’s good news for Celtic supporters who are eager to see him spend many more years at the club, hopefully avoiding the contract drama prior to him signing his previous deal in 2016.

He had just a few months until the expiry of his previous contract and at one point looked like he might exit the club.

Signing him up to a new deal must be seen as a priority and Rodgers moving to assure fans he is valued is great to hear.

What are your thoughts on James Forrest’s form in recent seasons? Let us know in the comments…