“Failed player”, “Career should have an asterisk” – Hoops fans hit back at former Gers title claims 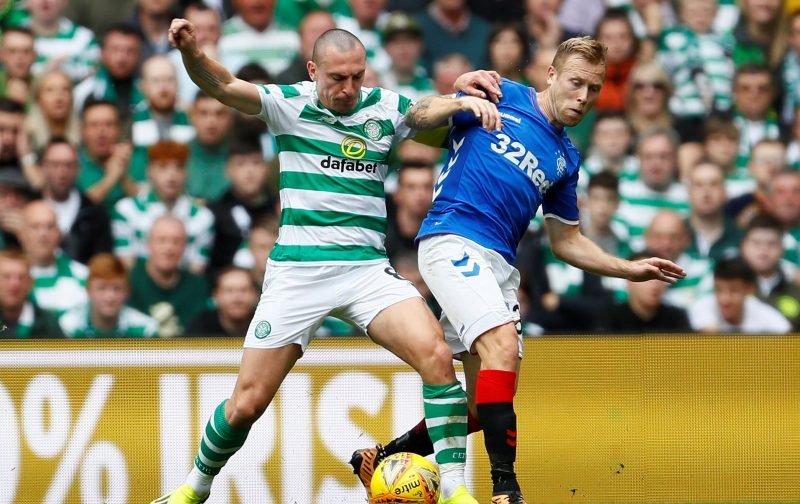 Recently released Rangers midfielder, Andy Halliday, is the latest of a blue persuasion to try to convince himself and others that Celtic’s Premiership title and 9-in-a-row achievement is anything less than deserved.

“#CelticFC were the favourites.” ☘️

“But if you can’t finish the season, I’m unsure how you can award a title?” 🤷‍♂️

“There’s definitrly a asterisk over it.”

Speaking to Talksport, Halliday claimed that because the season hadn’t been played to a finish, it was impossible to award the title to anyone:

Halliday is simply playing to the Ibrox hordes, during the interview he hardly seems convinced of what he is saying himself let alone convincing others.
There may be issues in France and Belgium with regard to their respective domestic seasons being finished early but the majority of the debate surrounds teams that are being penalised financially for being relegated – not the awarding of titles.
Hoops fans took to Twitter to respond to Halliday’s comments, finding irony in a player who was at Rangers for five years and failed to win a trophy issuing judgement.

Love the pain of a failed player crying over losing yet another league title. All this asterisk talk makes it much sweeter 😘

That’s the correct use of an “asterisk” pic.twitter.com/mzf5klbJ3y

Zat what he says😯 Aye? Worth listening to is Andy😕 this👇 Andy😂😂😂😂 pic.twitter.com/Z0P2hwTGc4

Andy’s career should have an asterisk over it

Halliday may be “staunch” but his five years at Ibrox achieved little more than derision and amusement for opposition fans – he will be missed more by them than by those of his own club.