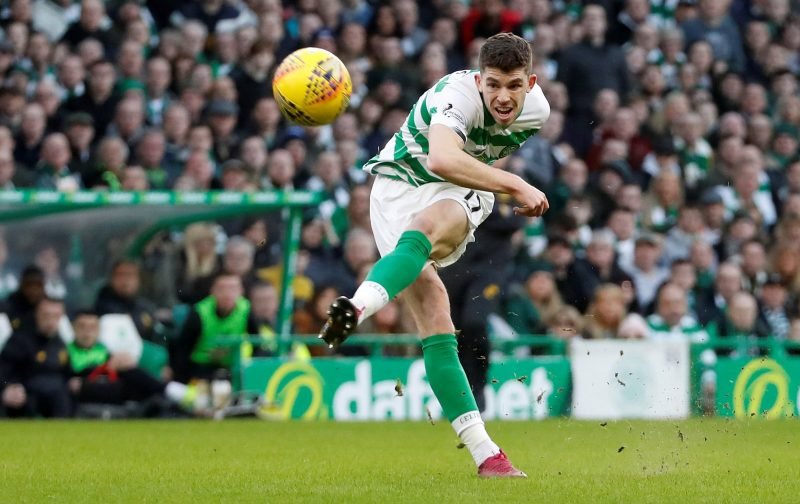 Neil Lennon is looking to tie down one of Celtic’s key figures in their chase for ten-in-a-row with the news that Ryan Christie is set to be offered a new deal.

Speaking to Football Insider, Noel Whelan, believes there will only be one outcome if the Scotland international gets the chance to extend his stay.

Whelan identifies the key reasons why he thinks Christie would be daft to think that the grass was greener anywhere else when he said:

“I think winning trophies, why would you want to go anywhere else? He’s very happy at the club, he seems to love the club, the fans love him, he’s had a great year, last year as well.

“It looks like he’s progressing, getting better and better, when you’ve got a happy football player and winning trophies, winning leagues, winning cups and you’re in Europe, why would you be looking anywhere else right now?

“I’m sure if they’re going to put a contract in front of his face, he can’t pick that pen up quick enough to sign it. It’s great the way Celtic are going about their business, keeping hold of their prized assets and there’s more to come from him, absolutely.”

So is Whelan right?

Not only is Christie in the right place to achieve all his goals, Whelan forgot to mention the family connection with the club – his father was on the books at Parkhead in the 80s – an emotional tie can often influence the decision making process.

Christie has gone from almost being shown the door to one of the first names on the team sheet and but for an injury in December, would’ve been a serious challenger for Odsonne Edouard in the player of the year stakes.

Whelan had valued Christie at over £30million at the height of his powers last season and it’s easy to see why with 19 goals and 16 assists, a player as versatile and prolific as the 25-year old Scotland man really is worth his weight in gold and the Celtic gaffer should do everything in his powers to keep him where he belongs.