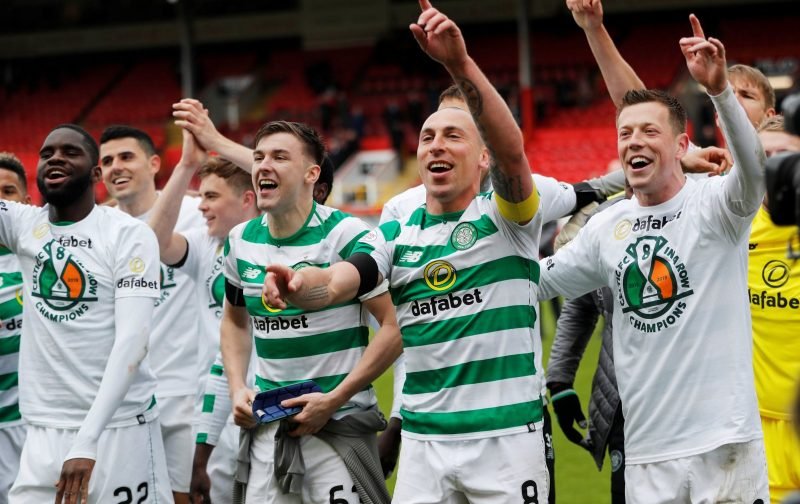 Celtic legend, Chris Sutton, has reacted – as he usually does – in great style to former Rangers centre-half, Gareth McAuley’s claims that he “wouldn’t be celebrating” if he had been awarded a league title in a similar fashion to the one that has seen the Hoops crowned 9-in-a-row winners.

Deary me…Gareth McAuley “l certainly wouldn’t be celebrating “… unfortunately for him he never did get the opportunity… https://t.co/N6DccT1Gqc

As well as claiming that the current Celtic side won’t be held in the same light as the original record breakers, he also belittled the achievement due to Rangers absence from the top flight for so many years, when commenting in the Sunday Life (reported in The Daily Record)  about the most recent success he said:

“I actually feel sorry for the Celtic players. They didn’t win the title on the pitch, they were handed it.

“They have officially been crowned champions, their ninth success in a row, but this triumph will always be tainted and hollow.”

McAuley’s last season as a professional was at Rangers and it showed, as he struggled to feature and looked every inch the 39-year old trying to squeeze in one last go at the club he supports.

Celtic fans took to Twitter in support of Sutton and mocked the former Gers player’s claims doubting his credentials as one who can judge success.

Had to google him. Apparently he won the Irish Cup in 2002 so he knows what hes talking about.

Cople of beers an off he goes about his 1 honour, ‘so it’s the Irish Cup Final’.. friends up and leave.

Absolutely Gareth..you would know all about celebrating with your own list of honours pic.twitter.com/cH8WNwjV3W

McAuley’s comments may have carried more weight if he hadn’t spent the majority of his career bouncing around the Championship and fighting relegation in the Premier League, for any Rangers fan to say that if the shoe was on the other foot – unlikely as that may sound – that they would turn the title award down, is as nonsensical as claiming that they are the same club as the one that was liquidated in 2012.