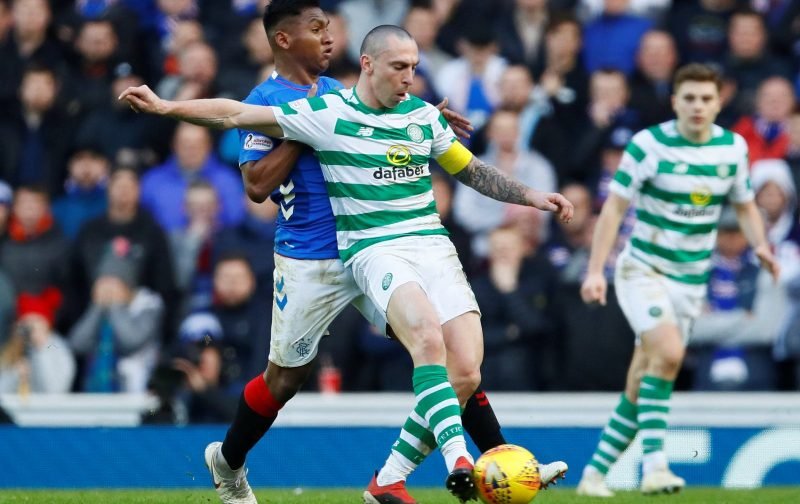 Celtic captain Scott Brown is still hurting from December’s derby defeat to Rangers at Ibrox, but believes it’s been a motivating factor for the upturn in form after the winter break, speaking to Celtic TV.

The Hoops lost Brendan Rodgers’ last derby game at the club, defeated 1-0 in our final match of 2018.

Since then we’ve been undefeated in domestic action, winning every match apart from one 0-0 draw against Aberdeen at Celtic Park.

It’s form that has put us on the brink of an eighth league title in a row, knowing a victory in Sunday’s match against Steven Gerrard’s side puts us 13 points clear at the top of the table.

Speaking to Celtic TV, Brown has spoken about what the defeat at Ibrox meant to the squad:

It will always hurt.

I think we went on a record-breaking run against them as well, 12 games undefeated against them.

It was great for us to go on that run but it was always going to end eventually and just the way it ended we didn’t play that well at Ibrox and we know that ourselves.

But we bounced back, we came back from Dubai and had a good wee mini pre-season under Brendan and the lads and it spurred us on for the last half of the season.

Hopefully the loss serves as a bit of extra motivation ahead of Sunday’s encounter.

Brown was heavily criticised by pundits and supporters in the wake of December but since then he’s been mostly immense in the middle of the park, finding his scoring boots and making some vital attacking contributions.

You would expect him to use all that criticism to raise his game this weekend again, with the best way to exorcise demons from December clearly being piling the misery on the Ibrox side at Celtic Park.

What are your predictions for the match at home to Rangers on Sunday? Share your thoughts in the comments below…