Former Scotland defender, Alan Hutton, believes that Hatem Abd Elhamed has given Neil Lennon a selection headache after his nine minute cameo appearance against St Mirren at the weekend.

Speaking to Football Insider, Hutton explains why the Parkhead gaffer is in a difficult position following Elhamed’s return to fitness.

The retired Tottenham Hotspur full-back was reacting to Elhamed’s performance when he said:

“He did really well. Obviously the formation now wasn’t the way they were playing back then.”

“We all know he’s a good player. Whether he does go back in, we don’t know, because Celtic are playing so good at the minute so it’s going to be difficult. These are the headaches you want as a manager.”

“Coming to the business end of the season, you want everyone firing, everyone playing well, everyone pushing each other moving forward. When you get injured players who are big players coming back, that’s just going to boost everyone to the next level.”

Yes, in more ways than one, Elhamed is a more than competent operator at both centre-half or on the flank and Lennon could see him as a more solid option on the right-hand side of his defence.

Jozo Simunovic has come under criticism recently, particularly for his display against Copenhagen in the Europa League at Celtic Park, and Elhamed could be the man to take his slot in a back three particularly with the Croatian’s injury history affecting his appearances on artificial pitches.

Should Elhamed get the nod ahead of Simunovic in a back three? 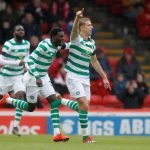 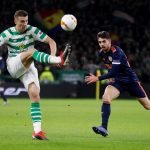 Since Elhamed’s injury, Jeremie Frimpong has emerged as first-choice right back only for Lennon to change formation as Hutton mentions, to a 3-5-2 and James Forrest being played as right wing-back.

The Parkhead gaffer has a problem in that he is spoilt for choices, every manager’s dream, especially with a massive lead at the top of the league.