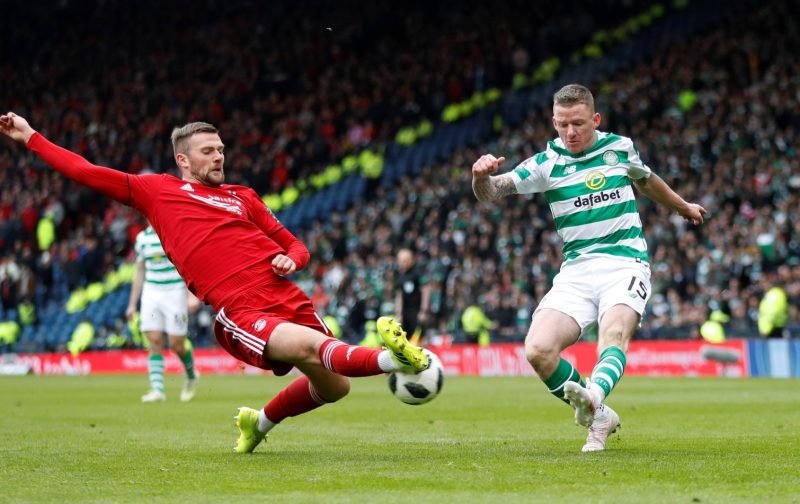 Celtic fans are celebrating a 3-0 Scottish Cup semi-final victory over Aberdeen this afternoon, after goals from James Forrest, Odsonne Edouard and Tom Rogic sent Neil Lennon’s side into the final of the competition.

With the league almost wrapped up, the Hoops are just a few matches away from securing a famous ‘treble treble’.

Hearts await us in the final of the Scottish Cup but we’ll fancy our chances of getting the job done after a superb display against the Dons today.

One of the stand-out performers for many fans was Jonny Hayes, who produced a hardworking shift on the flanks to help his side towards victory.

Luring Dominic Ball into conceding his first of two yellow cards in the first half, Hayes would go on to win a penalty that Edouard stroked home to put the game beyond Derek McInnes’ awful Aberdeen.

He was a threat all afternoon after being something of a surprise on Lennon’s announced teamsheet. He’d made just seven starts this season prior to today’s match.

Hayes gets plenty of criticism for his performances but today was one of his best in a Celtic shirt and he’s receiving deserved praise on social media.

Stroll in the park. Jozo van Dijk and Jonny Hayes outstanding. James Forrest rising to the occasion once again. Brown bossed it in the middle of that park. A class above.

Jonny Hayes good game or bad will always give Celtic 110% and its aw you can ask for. Superb today

Well done Jonny Hayes – lured Dom Ball in for his first yellow, won the penalty, energy and urgency all day.

Much maligned, rarely lets us down. ????

He’d hit form just before that leg break. Great to see him getting a run again and looking good.

He's a great option for us. If we need to play wide, Hayes and Forrest can do a great job stretching the opposition. Sinclair unbalances us in some respects as he cuts inside so much it can get very predictable.

— SMSM has banned all Celtic celebration and smiles (@DBestseventy2) April 14, 2019

What did you make of Jonny Hayes’ performance against Aberdeen today? Have your say in the comments below…