New media pundit lines up to stick the boot into Celtic star, this time it’s a former teammate 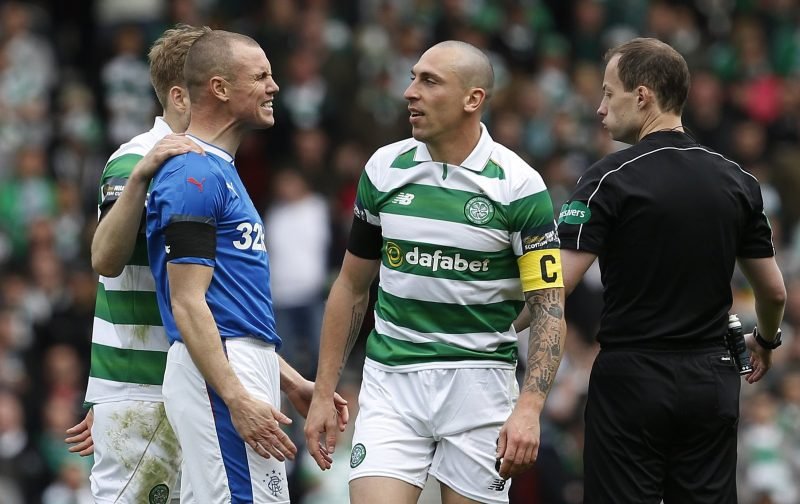 Celtic captain Scott Brown has again come in for media criticism for his actions after the match against Rangers this Sunday, this time from Dundee player Kenny Miller, as reported by The Scottish Sun.

Miller played with Brown for the Scotland national team so probably knows better than most that what the midfielder brings to a team in terms of personality and character.

It seems though that it’s the duty of most media pundits in the country to hammer the Hoops midfielder for celebrating a vital derby victory.

Today it was announced that Brown had been cited for disciplinary action and Miller appears to feel it is justified.

As quoted by The Scottish Sun, the Dundee forward said:

Scott is getting cited for making gesture to the the Rangers fans. Before the game, he is instructed – don’t incite the opposition fans. After the game, he went over and apparently made a gesture and I don’t think he should.

Show a bit of class. You’ve won the game, you are going to win another title and you are on for a Treble.

You don’t need to do that. You are the Celtic captain and you were the captain of the national team.

You can be bigger. Go and celebrate, rightly so, with your own fans. I haven’t seen the gesture but there is a reason why he’s been cited.

Funnily enough there’s no comment on Brown being punched in the face by Ryan Kent or elbowed by Alfredo Morelos, but I suppose we can sweep violence under the carpet when there are celebrations to slam.

Thankfully it appears the club will be backing the captain to the hilt when it comes to the SFA charge and hopefully a robust defence will see him go unpunished.

If pundits like Miller are unhappy with Brown now, I don’t expect they’ll much enjoy seeing him lift the Scottish Premiership trophy come May.

What do you make of the continuing furore surround Scott Brown? Share your thoughts in the comments below…