‘Offers zero’, ‘Disappeared’ – One Celtic star did not make fans happy at all last night 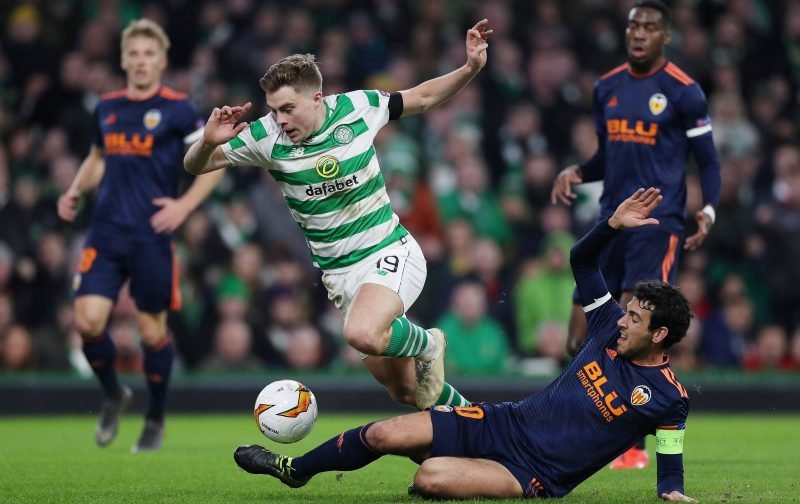 Celtic’s entire focus will now be on domestic football after Brendan Rodgers’ side crashed out of the UEFA Europa League last night.

With the damage of last week’s 2-0 first leg defeat to Valencia too much to overcome, fans only expected the team to give a spirited performance in Spain on Thursday evening, and for the most part were not disappointed.

The Spaniards won 1-0, but only after wearing ten-man Celtic down, with the Hoops battling hard to give themselves a chance of getting something out of the match.

Stars like Kristoffer Ajer, Jonny Hayes and Scott Bain won plaudits for excellent displays, but fans were not happy with every player’s performance.

James Forrest stuck out as someone who did not enjoy the best of evenings, struggling to impact on the match at all before being substituted for Odsonne Edouard.

The winger had incredible early season form and recently has shown signs of getting back to that domestically, but last night was one to forget for the Scottish international.

Wee forrest has been quite poor since the winter break, hink we shud use Burke out wide see how he gets on

Just to balance the optimism about this, Forrest disappeared again. Burke is not a striker. And Eddie looks way off it

Get Weah on for Forrest now he is not in the game at all again tonight.

Forrest has been honking tonight! Not his fault. Just doesn’t offer enough in this formation. Has to be subbed for Weah or Eddy