Former Premier League striker, Darren Bent, believes that Sheffield United forward, Billy Sharp, is making a mistake if he has an offer to join Celtic and rules it out.

Speaking to Football Insider, Bent judges Sharp’s season so far as he has struggled for game time in the Premier League.

When asked if he felt that Sharp should seriously consider joining Celtic should the offer be put in front of him, he said:

“Yeah I mean listen, he’s had a great career playing in the lower leagues, scoring a lot of goals”.

“But yeah for him to go and play for a big club like Celtic, go and win trophies up there, get in the Champions League, I’m all for that”.

“A lot of people think the Scottish league isn’t great, and competitive wise maybe it isn’t great but to go play in the Champions League with Celtic and win trophies, I’m all for it”.

“I think it’s a move he should seriously consider”.

It may now be a case that Sharp has missed the boat with Celtic signing 21-year-old Patryk Klimala from Jagiellonia Bialystok for £3.5m, and as they still have Odsonne Edouard, Leigh Griffiths and Vakoun Issouf Bayo on the books it would be a strange move for Neil Lennon to bring another striker to the club in this window.

For all that Bent is right in that Sharp would’ve had the opportunity to win trophies, the chances of him getting much game time would’ve been minimal, Edouard is undisputed number one and even a fit Griffiths would struggle to dislodge the France under-21 international in his current form.

At 33-years-old, Sharp will be wanting to play regular football and if he isn’t – or that can’t be guaranteed – he won’t be wanting to sit on the bench, or even worse, in the stand, in the Scottish Premiership.

Is Billy Sharp worth a punt to add extra firepower to Neil Lennon's side? 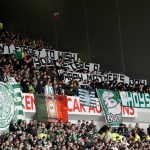 Whether or not Sharp ever had the opportunity to sign for the Hoops remains to be seen but the chances are he won’t get it again, regardless of how many goals he may have scored in England’s lower leagues.