Celtic are rumoured to be lining up a move for Bristol City winger Niclas Eliasson with the transfer window soon to close according to a report in The Scottish Sun.

The article claims that the Hoops have sent scouts to watch the 24-year-old Swede and are monitoring his contract situation – his current deal runs out in the summer but it is believed that City have an option to extend it by another year – and may make their move this window if they are given any encouragement.

“The way I would see it is he has 18 months on his contract but we would absolutely love it for him to sign a new contract. We value him hugely”.

“We’re discussing, he’s changed agents, but we’ve been sitting down and talking about it since the start of the summer but then agents change, other priorities come in between that. But the simple stance is we’d love him to stay longer”.

“In any negotiations it takes time but currently he has 18 months on his contract and we’d love to see it extended”.
Celtic have already splashed out on Patryk Klimala and Ismaila Soro to the tune of £5.5m in a bid to push on over the closing stages of the season.
The Celts are already well stocked for wingers with Neil Lennon able to call upon James Forrest, Mohamed Elyounoussi, Marian Shved, Mikey Johnston and Daniel Arzani plus Karamoko Dembele breaking through into the first-team now too.
Lennon’s men will be in buoyant mood after the latest round of league fixtures saw them open up a five point gap at the top of the Scottish Premiership and he will be keen to press home this advantage with a difficult run of fixtures that sees them play four of their next five fixtures away from Parkhead.

Do Celtic need another winger? 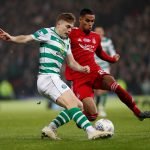 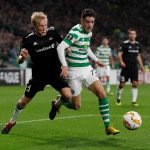 Eliasson is clearly wanted by his club and with the likelihood of him not being available at a knockdown price, Celtic may have to look elsewhere or prioritise their spending in another department due to his position already being an area of the park that has plenty of quality and strength in depth – one that is key in firing the Hoops to 9-in-a-row and continued domestic dominance.