Cruzeiro centre-half Fabricio Bruno has seen an end to his long running saga with the club after he was freed from his contract which paves the way for him to join long-term admirers Celtic.

A report in The Daily Record claims that the defender is now able to continue negotiations with the Parkhead club after Cruzeiro revealed earlier in the season that talks were under way about a possible transfer.

An official statement was surprisingly candid in revealing the details of the transfer negotiations which was covered by The Daily Record and read:

“Fabio Mello (the player’s agent) reported that he was meeting with Scottish club officials in London, England, and was authorised to make a loan proposal from January to June 2020, with Celtic paying 300,000 Euros for the loan and 2.5million Euros more if Fabricio Bruno was approved during this period”.

“Cruzeiro did not accept and countered 1million euros for the loan and 4 million euros if the player was approved”.

Bruno was forced into taking legal action after claiming that Cruzeiro had not paid him wages dating as far back as May and although a deal had been agreed to sell him later in the year, the transfer fell through and court proceedings continued.

The Record now claims that Cruzeiro have retained 25% of Bruno’s registration meaning that any club looking to secure his signature would have to buy out this clause or pay them a percentage of any subsequent transfer.

Celtic are now free to negotiate directly with the player and if they were to proceed with his signing they would have to pay considerably less than the near £3m fee it would have cost them in previous negotiations.

Although the transfer window still has two weeks left to run, Bruno is now classed as unattached and as such, the Hoops won’t have to rush in to any deal unless interest in the 23-year-old intensifies. Red Bull Bragatino had “completed” a deal just a matter of days ago but it collapsed because of the court proceedings and it may be that they come back in for him knowing that they now longer have to pay a significant transfer fee.

Do Celtic need to go back in for Fabricio Bruno to strengthen the defence? 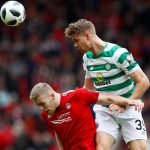 Neil Lennon continues to be busy as he looks to improve the quality of his squad and secure the club’s ninth successive Scottish Premiership title in what is shaping up to be a nail biting second half of the season.