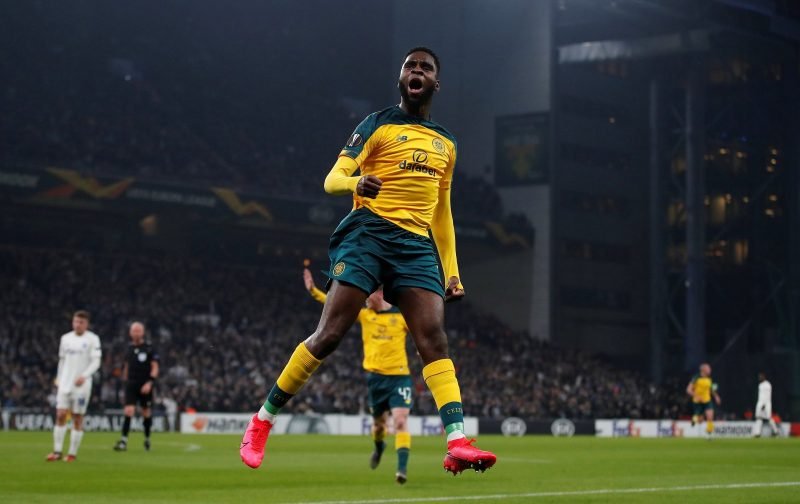 With a lack of football to report on, transfer speculation is increasingly filling the void of the back pages and Odsonne Edouard has once again been making the headlines.

The Mirror has claimed that Arsenal are the latest team to be interested in making a move for the talented 22-year-old, adding to an already long list of Premier League suitors.

Everton, Leicester City, Manchester United and Tottenham Hotspur have all – at one stage or another – be linked with the 27-goal striker who is the on-form player of 2020 and headed for a potential clean sweep of personal accolades at the end of the season.

With Neil Lennon shifting to a 3-5-2 formation and throwing Leigh Griffiths upfront to partner Edouard, Hoops fans have seen the best of the striker in not just his goal-scoring prowess but also his overall link-up play.

His ability to play in a variety of formations, although great for Celtic, only makes him a more attractive proposition for clubs that are keeping an eye on his progress.

Edouard has gained a lot of experience in his professional career so far despite still being eligible for Under-21 football and will have been at Celtic for three seasons when 2019/20 eventually ends. Ten-in-a-row may have emotional and historic importance to the Parkhead faithful, however, it is unlikely to be enough of a pull to keep the forward in Glasgow.

With a long list of top Premier League sides now queueing up for Edouard’s services, not only will Celtic be able to push the price tag up but it will make it harder to persuade him to stay for one more season. It may be hard to accept, but potentially playing for Manchester United, Spurs or Arsenal will far outweigh playing on plastic pitches against the likes of Kilmarnock, Hamilton and Livingston and facing the same opposition at least four times a season.