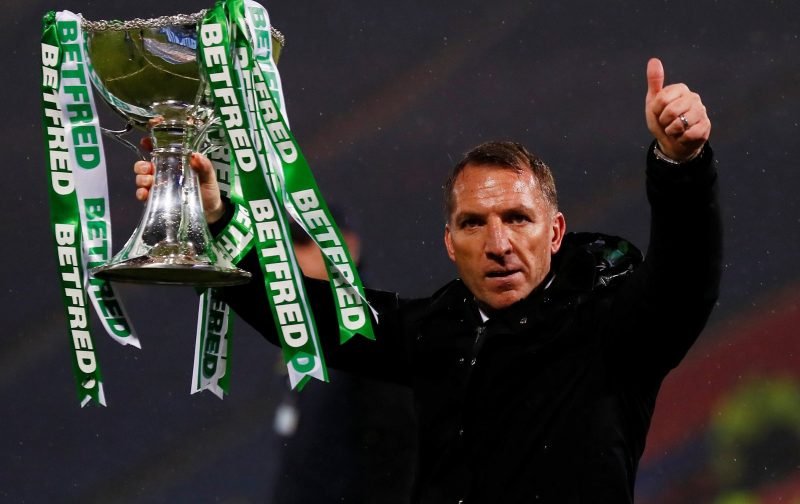 There’ll be no rest for Celtic manager Brendan Rodgers after today’s momentous Scottish League Cup win over Aberdeen, with the Hoops boss confirming he’ll be flying out to open negotiations on a potential signing.

The player involved remains a mystery but it’s clear the seven-trophy winner is intent on improving the squad when the January transfer window opens next month.

Speaking to The Scottish Sun before today’s Hampden clash, the manager said:

I ask people to celebrate success, I want them to enjoy it, but I think sometimes when you are the leader you tend to look for the next experience.

And very quickly, for some reason, that’s my next thought, you know.

So I know that after the game on Sunday, I’ll be flying out to speak to a player on Monday, so there won’t be any big celebration whatever it is, or not, whatever way it is.

We have to get to work the next day.

With a number of positions needing strengthened, it’s exciting to think of who could be on his way to Celtic Park. Is it a defender? A third striker? A right-back?

Rodgers revealed the information when talking about potential celebrations and time off for his squad of players if they were to win their seventh successive domestic trophy.

The players will have to wait until the mid-season break for that, with a huge match against Motherwell to come this Wednesday.

With Rangers moving to the top of the table today with a win over Hearts, the three points are vitally important.

‘If he hit Tyson Fury, he’d stay down’ – Celtic fans can’t get enough of strong star after final