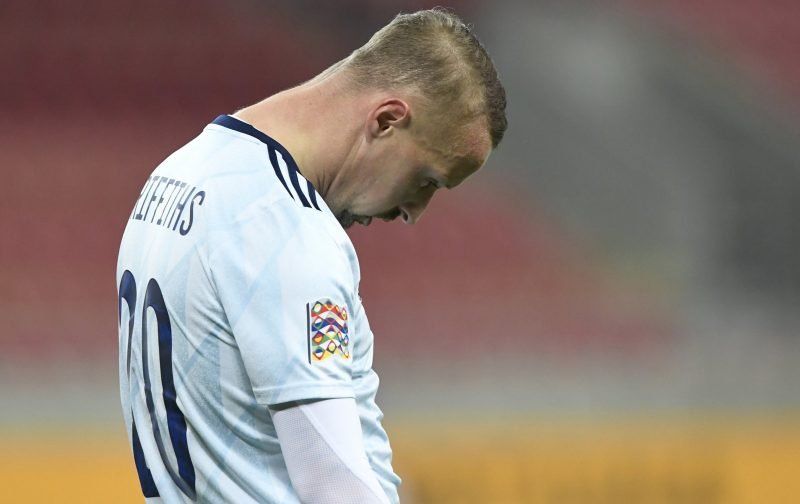 It was in Scotland’s grasp. We were in control of our own destiny but as usual we Hibs’d it. All that was required was for the Scots to take three points in their two final games to guarantee promotion to in the Nations League.

The final match against Israel who are ranked 88th in the world, forty three places below Scotland, was set up for another night of celebration but a return to Scotland’s usual hard  luck story saw Israel take three points and leave Scotland second in Group B2.

Two insipid performances against the Slovakians and the Israeli’s after the euphoria of last Friday night will no doubt disappoint Steve Clarke, but it will bring the players crashing back to earth. Albeit, tonight’s performance was much improved from the night against the Slovaks, Scotland dominated with 19 shots on goals, 12 corners and 51% possession but couldn’t convert that dominance with a much needed goal.

Four Celtic players featured in the match, Christie, McGregor, Bitton and Griffiths made an appearance as a substitute in the second half.  Unfortunately for Scotland, Bitton had a solid display against Scotland’s front two of Dykes and Christie as the home team set up with five at the back.

Christie was his usual industrious self, trying hard to be creative to make space and chances for Dykes but for all the work, there was little to show. McGregor had a quiet game but for all the effort there was no penetration or killer balls to help break down the Israeli defence.

Griffiths was given the nod after 62 minutes as he came on to replace McGinn to give the extra dimension up front.  The Celtic striker had flashes and should have done better with a knock down at a corner but scuffed his shot straight to the keeper.  In the dying minutes, Leigh was tee’d up with a free kick from about 22 yards but the Israeli keeper matched the pace of the strike and palmed it away for a corner.

It was a tough night for Scotland, but with qualification for the Euros the target for this break, it was a successful international period. As Celtic’s Scots return to domestic duty on Saturday, lets hope their performance is much improved from tonight’s serving.