Celtic may have paid big money on a 12-month loan deal for Shane Duffy but one man who is well placed to assess the quality of the move is former skipper, Paul Lambert, who managed the Republic of Ireland international at Blackburn Rovers.

Lambert has hailed the transfer as a “great signing” but has also raised a concern about a factor Duffy has so far not had to deal with in his career, as reported by The Scottish Sun.

So what has Lambert said?

When asked to give his verdict on the Hoops latest signing, he said:

“It’s a great signing. He will head things you think people aren’t even going to put a foot in for. They’re getting someone who is proper physical. He will put his body on the line, that’s for sure.

“I’m pretty sure Shane will thrive in the atmosphere when the fans come back. But it will be the first time in his career that he is going to have to win every game. That’s the difference.

“I saw great players coming to Celtic and capitulating because they couldn’t handle the crowd.

“If you thrive on it, you’ll love it, if you think it will be a millstone round your neck, you’ll struggle.”

So is Lambert correct?

Anybody who has watched Brighton in the Premier League knows what sort of player Duffy is but Lambert does have a point, in most games that he played for the Seagulls, he would not be expected to win, and in some cases, games would even be seen as a free hit with no pressure at all to gain a result.

In every season, Celtic are expected to win every game, in this season, that pressure has been ramped up ten fold – so to speak – and any dropped points will be treated as a catastrophe.

What goes in the Irishman’s favour is that he isn’t a kid anymore, at 28-years old he has plenty of international experience as well as having to deal with both promotion and relegation battles – although not the same level of pressure, it will still serve him in good stead.

Will Duffy handle the pressure of life at Celtic Park? 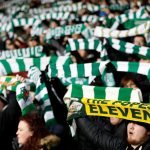 The only thing he might struggle with is having to defend fifty yards closer to the opposition goal than he would have previously, and be aware of the acres of space between him and his goalkeeper rather than being able to turn round and shake hands with him as he would have done against some of the Premier League’s elite – his passing statistics are also about to get a whole lot better without the likes of Raheem Sterling, Sadio Mane and Harry Kane nipping at his heels.