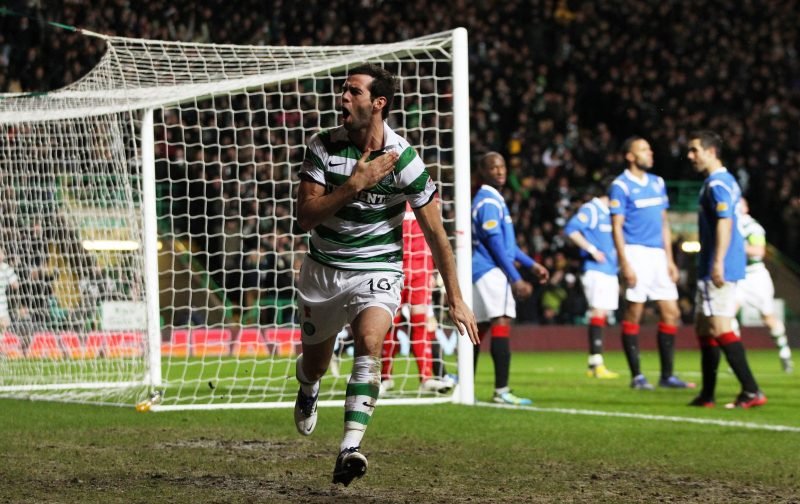 Former Celtic favourite Joe Ledley believes his former manager Neil Lennon comes into his own on derby day, instilling his passion for the club into players who did not grow up as Hoops supporters.

Ledley was a key part of the first Lennon era at Celtic Park, making over 150 appearances for the club, winning four trophies and scoring a couple of important goals in the Rangers derby itself.

He’s now offered insight into what it’s like playing under the Hoops boss on such an occasion as Lennon prepares for a mammoth derby this Sunday.

As quoted by The Daily Record, the midfielder said:

Lenny was great in the dressing room before the Old Firm games. His team talk would get you so psyched up for the game and hammering home what it means to the fans.

You could see deep down how much it meant to him and then afterwards he would come in and hug you, tell you how much he loves you, how great you were and what a result it was.

He’d speak to you one on one and tell you as a team and as players you love that in a manager and want to work under a boss like that.

He was brilliant and doesn’t half get you up for the games. You knew it was totally different to any other game and there was a lot of pressure on you to perform and get the result.

He’s going to relish the occasion on Sunday with the cameras on him and things like that but he’s more experienced now and he’ll know what he needs to do to set his team up and get them over the line.

Fans are expecting a big result this weekend and although we are currently undefeated under Lennon since he arrived in the wake of Brendan Rodgers’ departure, it’s fair to say there is a bit of pressure on this one.

Lennon’s every move is being scrutinised ahead of a decision on his future as manager at the end of the season and a stylish victory over our city rivals would go a long way to winning over supporters.

A win will also put us 13 points clear at the top of the Scottish Premiership with just seven games remaining.

Can the manager inspire his team to derby success at Celtic Park, just like during his first spell at the club?

What’s your score prediction for Sunday’s match? Have your say below…