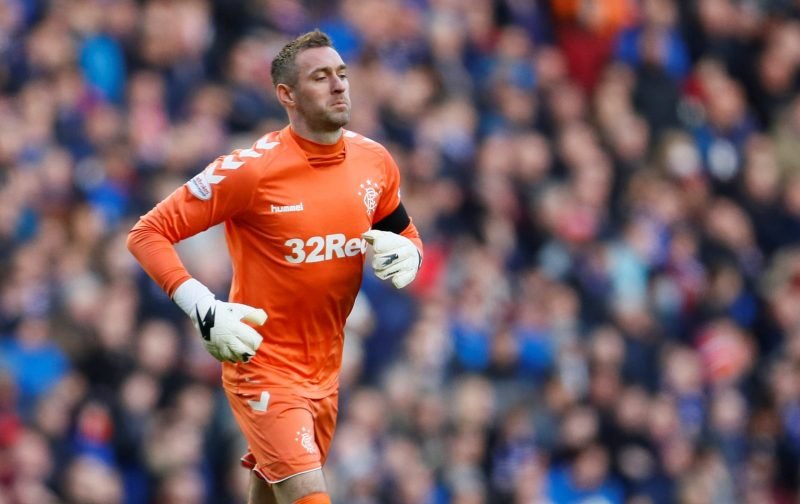 Celtic fans are finding the fact that Rangers goalkeeper Allan McGregor is suspended for this weekend’s derby at Ibrox hilarious.

The veteran shot-stopper was sent off against Hibernian on Sunday after needlessly kicking out at Marc McNulty, receiving a straight red card from Bobby Madden which should rule him out of our visit to Rangers.

Given he is one of their best and most important players and our history of firing in goals against Wes Foderingham it’s fantastic news for us.

We go into the derby with almost zero pressure on our shoulders, apart from the pressure the derby naturally brings, having secured an eighth league title in a row on Saturday.

The right thing of course would be to expect a classy guard of honour from Rangers, but time will tell whether they can show the humility to do that.

The fear of McGregor having to face Edouard and Forrest again is too much, he’s shat it and lashed out for a deliberate red to make sure he’s suspended for the old firm ????

Alan McGregor is so staunch he got himself sent off so he doesn’t need to give Celtic a guard of honour next week.

He was the best player they had for the better part of our last encounter. Kept them from being put to bed in the first half, he's gifted us a win we were getting anyway ????????????.

I don't give a f about McGregor, but I'm salivating at the prospect of French Ed facing poor Wes Foderingham once again. Nightmares for that lad.

Alan McGregor showing his class as usual, massive discipline problem at Ibrox the team is full of thugs, how many red cards have that team had now ? Next week will show how classless they are when they refuse to give the Scottish Champions a guard of honour ????‍♂️

McGregor really doesn't want to take part in the guard of honour next week.

Take it mcgregor didn’t fancy the guard of honour next week ????

Are you confident of winning at Ibrox? Have your say in the comments below…