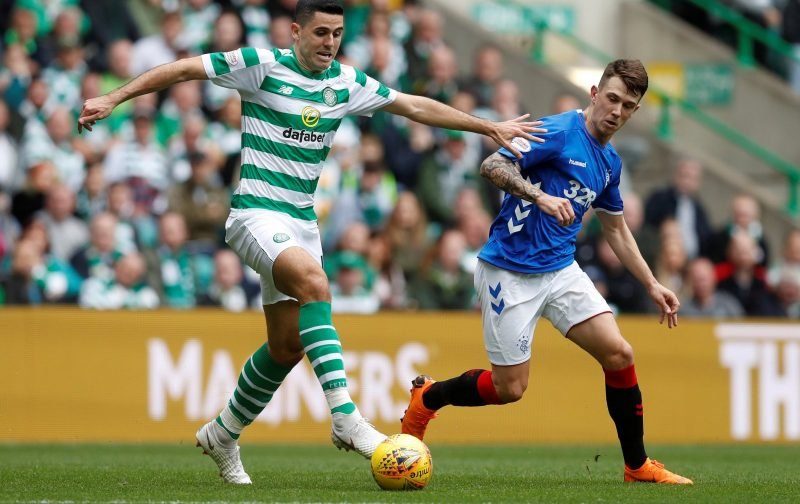 Celtic manager Neil Lennon is hoping Tom Rogic will be fit and available for the upcoming match against Rangers, but it’s likely the team will be without dynamic midfielder Ryan Christie, as reported by The Daily Record.

Rogic hasn’t played a single game for Celtic in 2019 so far having headed off to the Asian Cup with Australia in January before suffering an injury that has kept him out ever since.

Lennon though has revealed he is soon ready to return to first-team training and will have an opportunity to build towards the big derby match against Rangers at the end of the month.

Olivier Ntcham is also nearing a return, but Christie’s hamstring problem will rule him out.

As quoted by The Daily Record, Lennon explained the status of the injuries:

We’re hoping to get Tom on the grass next week and then he can have 10 or 12 days build-up towards the Rangers game after the international break.

Olivier Ntcham is also close to coming back, but they’ve had no game-time really. It’s a balancing act for us. We’ve got to get some good work into them over the next week to 10 days after Sunday and see how they react to that.

But I am optimistic that Tom will be able to play against Rangers – and the same applies to Ntcham as well. Ryan Christie has a hamstring injury, so he won’t make the Rangers game.

The lack of creativity in the Celtic midfield has been a real problem in recent matches and although the return of Callum McGregor has boosted that somewhat, we’re still missing a player who can produce real magic such as the Australian international.

If he can feature against Rangers it would be a real boost to the team.

Christie has also been key this season so the fact he misses out makes this injury update somewhat bittersweet, but hopefully he will be available for the sharp end of the title run-in and Scottish Cup push.

Fingers crossed training goes to plan for all involved.