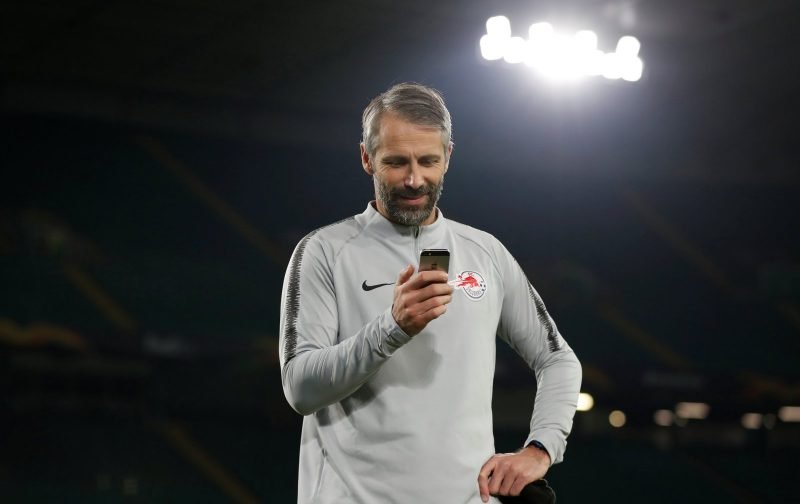 Celtic fans would love to see RB Salzburg manager Marco Rose appointed as the next permanent boss at Celtic Park.

As reported by The Daily Record, Rose has emerged as second favourite to permanently replace Brendan Rodgers, coming in from an outsider 33/1 shot.

Only Neil Lennon is more fancied by the bookies after taking charge on an interim basis until the end of the season.

Rose would certainly be an exciting appointment having found success at the Austrian giants playing innovative, attacking football.

Winning the league last season, he also guided them to the semi-finals of the UEFA Europa League, returning to the last 16 of the competition this year while also moving 11 points ahead at the top of the Austrian top-flight.

Whether a move for the rising manager is viable remains to be seen, but it’s clear that supporters would be delighted to see him in charge, taking to Twitter to share their thoughts this week…

Marco Rose as Celtic manager would take us to another level, simple as that.

Would take Marco Rose in a heartbeat at the end of the season, but doubt he will come to Scotland, bigger things await him #Bundesliga pic.twitter.com/lmvBDwDHjs

Marco Rose would be a cracking appointment, although how realistic it is I don’t know. Failing that I’m not sure this is time for a ‘project’ type appointment. I think if we can’t get a top experienced manager in we have to go with Lennon. It’s his job to lose.

Marco rose. Has turned Salzburg into a proper European team with a budget smaller/same as celtic, plays a style of football that we as a club aspire too. Played against us twice this season and tore us apart home and away. If we want to go forward long-term, get him in! ????????

Marco Rose. His team completely outplayed Rodgers team.
On similar budgets for spending as we have.
His team's pressing was different level and he manages a high quality team that gets results in Europe.
Cool name too! 🙂

???? Marco Rose… In the hope he could bring his RB Salzburg vision & scouting network along with him.
Similar budget to us, less salary than BR & smaller wage bill ????

Marco rose for me, but more than happy if Lennon gets it full time in the summer