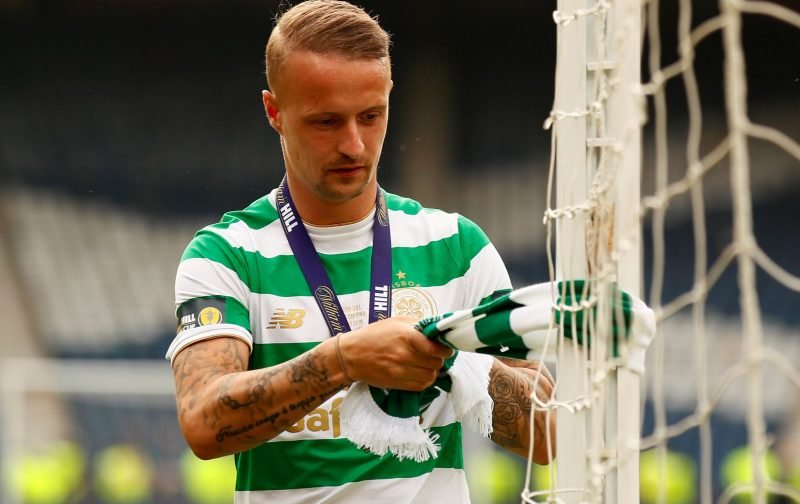 Leigh Griffiths has been backed to get his wish and score the goals that would secure another contract at Celtic and see him finish his career with the Hoops.

Former opponent, Alex Bruce, who spent his last season before retirement at Kilmarnock doesn’t see any reason why the striker wouldn’t be offered another deal in an interview with Football Insider.

Asked if he thought that Griffiths would get to stay at Parkhead for the remainder of his playing days, he said:

“We never know, do we? They’ve stuck by him during his problems off the field and he’s come back last season to hit a few vital goals.

“The one thing that he is up there is a natural goal scorer. He’s got that canny knack of putting the ball in the back of the net.

“To have him in the squad, someone who they call upon to grab them a goal, I don’t see any reason why not.”

It had looked – at one stage – this season that Griffiths could be heading out the door and when Neil Lennon splashed out £3.5million on Patryk Klimala, his days appeared to be numbered.

But, a change of formation, a consistent run of games and improved match fitness saw the Scotland international return to the sort of form that made him undroppable from the starting XI to the extent that Klimala has barely had a sniff of action since his arrival.

Griffiths has played second fiddle to both Moussa Dembele and Odsonne Edouard but has always been able to contribute and, in the very worst case scenario, he could now be trusted to lead the line should the Parkhead board decide to cash-in on the latter without having to break the bank on a replacement.

Lennon is a known fan of Griffiths and it would be no surprise to see his current deal – which ends in 2022 – extended, as the scourge of the Ibrox hordes sticks around a while longer, much to their obvious annoyance.