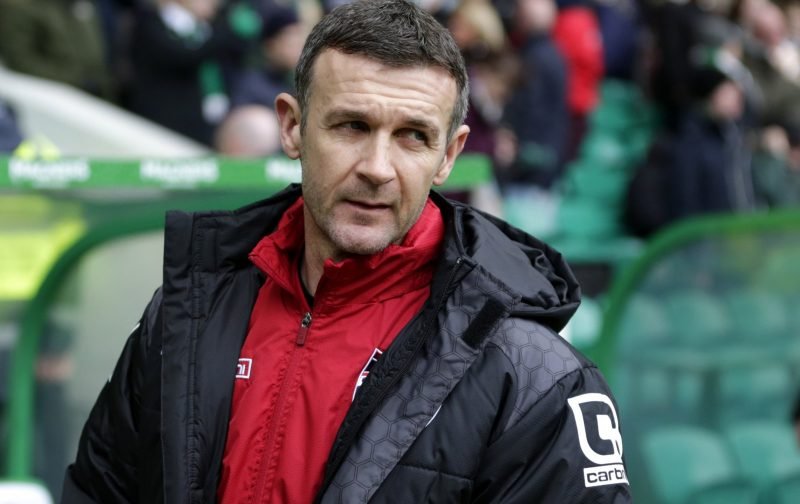 Dundee manager Jim McIntyre had a bizarre rant about the amount of stoppage time at Dens Park yesterday after Odsonne Edouard scored a late winner to send Neil Lennon’s Celtic side ten points clear at the top of the table.

Six minutes were added on at the end of the match after lengthy treatments for Kristoffer Ajer and Darren O’Dea, with five substitutes also contributing to the stoppage time.

McIntyre was not happy with that timekeeping decision from the match officials though and had a moan after the match about it all, implying that Celtic got a favour that Dundee never do.

As quoted by BBC Scotland he said: “We never seem to get six minutes added on when we are looking for it. I found it strange to say the least. It was a real surprise. I asked the fourth official, John Beaton, and he explain the referee felt there were three head knocks as well as the substitutes.”

It seems though that McIntyre has a very short memory. If you take a look back to a recent Dundee draw against Kilmarnock at Dens Park, you’ll see a very different story emerge.

In that match a massive six minutes of stoppage time was also added on, with Dundee pushing for a vital winner against their visitors.

The Dark Blues were even awarded a penalty in the fifth minute of injury time, a spot kick which was subsequently fluffed by Kenny Miller to deny the home side all three points.

Perhaps McIntyre should focus on capitalising on moments like those rather than bleating about injustices going up against the Hoops.