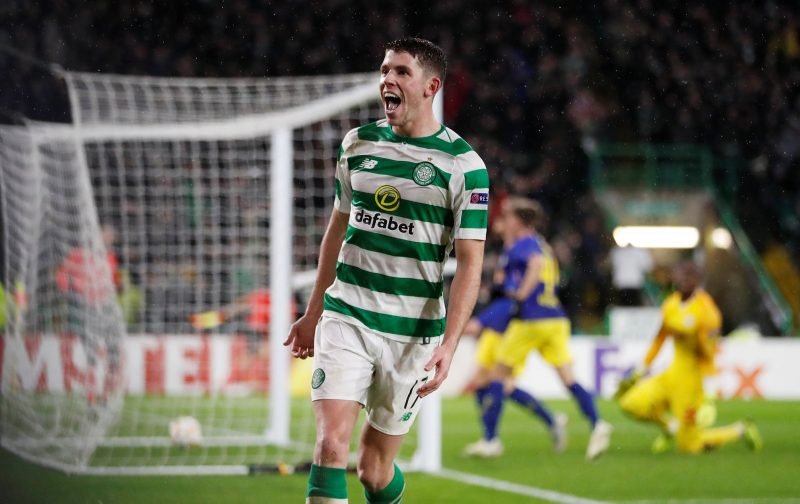 Tying Ryan Christie down to a new long-term contract will give the Celtic midfield great stability heading deeper into the season, with the 23-year-old impressing more and more with every passing fixture.

The former Inverness CT and Aberdeen man has been in stunning form over the past couple of weeks, but took his excellent performances to a new level last night against top class opposition.

He was arguably the team’s man of the match, providing Celtic with hard work, determination, composure and an ambition to get into the final third to supply teammates.

It was his bursting run and low cross that gave Odsonne Edouard the opportunity to score from close range, just seconds after the German visitors had equalised the game at 1-1 in the second half.

The winning goal was one of the best moments of the season so far and it was all down to Christie.

Fans were overjoyed with his contribution, with the following just a small selection of the praise for him on social media.

Stuart Armstrong has posters of Ryan Christie in his bedroom

Ryan Christie is a million times the player Armstrong ever was

Ryan Christie was outstanding tonight. He has been patient and is grabbing his chance in the team with both hands. Delighted for him #CELRBL #celtic

Would like to hold my hands up and admit that I got it completely wrong about Ryan Christie. Didn't think he was good enough and wanted him punted but fuck me, these last 3 and a half games he has been unreal.

Brendan the transformer working his magic yet again

That his contract runs out at the end of the season is hopefully not too much of a problem considering the Scottish international is keen on staying, according to latest reports.

Hopefully the details can be sorted out as soon as possible, because he’s finally providing the kind of attacking contribution we’ve been waiting for from him.

He scored 15 goals and providing 18 assists while on loan at Aberdeen and clearly seems intent on reaching those kind of numbers for the Hoops.

After Stuart Armstrong’s departure to the English Premier League, do we have a ready made replacement without having to dip into the transfer market? The evidence so far with suggest so.

With three goals and three assists since bursting into Rodgers’ team last month there’s been no stopping him and we can’t wait to see what more he has to offer.

Will Ryan Christie now get an extended run in the Celtic first-team, even when Scott Brown and Olivier Ntcham return? Share your thoughts in the comments below…