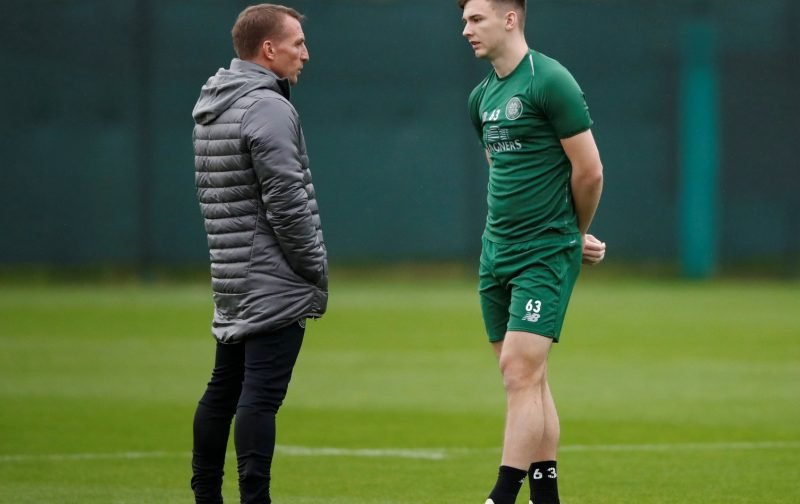 Celtic favourite Kieran Tierney has distanced himself from reports suggesting that Leicester City are interested in bringing him to the English Premier League this summer.

The Scottish Sun reported in the days following Brendan Rodgers’ departure that the Foxes were keen on signing the 21-year-old as part of the former Celtic boss’ initial splurge in the transfer market.

Tierney though brushed that kind of speculation aside speaking in the wake of yesterday’s 0-0 draw at home to Aberdeen.

As quoted by The Scottish Sun, the left-back said:

It’s natural that he will be linked with players from his old club but it’s nothing I know of. I’ve been on the end of speculation for a few transfer windows so it’s nothing different for me.

It doesn’t take my mind off Celtic.

It all happened so quickly and there was shock. It surprised everybody. He texted the boys after he left and wished us all the best.

We thank him for all he has done as he’s helped me become a much better player. The fans are hurting. That’s quite clear to see.

But I think we now need to focus on Celtic. What’s done is done.

Tierney is a key member of the team and as we head towards a potential ten league titles in a row, he is one of the players that fans would insist simply have to stay.

His desire, commitment and passion for Celtic is unlike no-one else in the starting eleven and he knows exactly how much this all means to supporters.

Although he didn’t completely rule it out with his comments, the chance of him leaving this summer, for Leicester City of all teams seems remote.

It’s far more likely he’ll be seen on the left flank of the Celtic side next season and beyond.