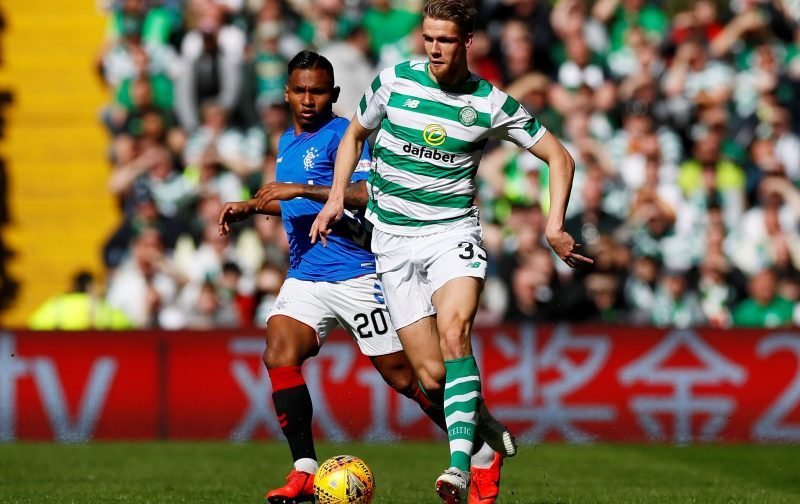 The Norwegian international was a titan at the back for the Hoops, making goal-line tackles, receiving treatment for blood injuries, getting himself justifiably involved in incidents with Alfredo Morelos and Ryan Kent, bringing the ball out of defence with composure and skill, showing maturity beyond his years and displaying a serious passion for Celtic.

Still just 20 years of age, the sky appears to be the limit when it comes to his potential and supporters are thrilled by his continuing development.

Players like Odsonne Edouard and James Forrest may have stolen the headlines with their goals but there’s no doubt in many’s eyes that Ajer was the absolute stand-out across the 90 minutes.

With Dedryck Boyata leaving at the end of the season, his emergence as a top centre-back is coming at the perfect time and he looks guaranteed to be a starter next term.

That reaction from Ajer when he blocked a goal.

The big man could be a Celtic legend.

Ajer has the making of a legend.

Ajer reminding me of Paul Elliot today. Really hope he stays for a while…

The talking point at half-time will be the goal and red card, but I would just like to point out that Kristoffer Ajer is a wonderful human being and was dominating this team and this match before it all went wild.

Came straight home after the match and watched it on TV.
Kristoffer Ajer was absolutely outstanding in that last 5 minutes.

Big ajer is fast becoming one of my favs

Ajer was an absolute monster at the back by the way. His block in the last minute was sensational!!! What an absolute rock.

What did you think of Kristoffer Ajer’s performance today? Share your thoughts in the comments below…