Following Sunday’s Scottish Premiership action, Celtic and Rangers continue to battle away at the top of the table, with only goal difference seeing Neil Lennon’s side occupy top spot.

It’s turning out to be a closer battle than many thought at the beginning of the 2019/20 campaign, but the advantage is still ours and fans will be demanding it stays like that and that we open up a buffer zone on Steven Gerrard’s side to account for any potential slip-ups down the line.

With plenty of pundits having their say on whether our dominance will continue or whether there will be a shift this year, former striker Craig Beattie has weighed in on the topic this week and questioned whether we have ‘the bottle’ to once again defend the title.

I can sort of see what Beattie is doing here. It makes for better headlines to question Celtic’s ‘bottle’ given our position but in doing that, it keeps us on our toes and keeps the race firmly in our hands.

Does Beattie Have A Point? 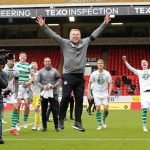 As long as we do the job in the league, advantage remains ours in the Old Firm clashes and whether or not you believe Gerrard’s side can last the pace, our clashes with them will be the decider.