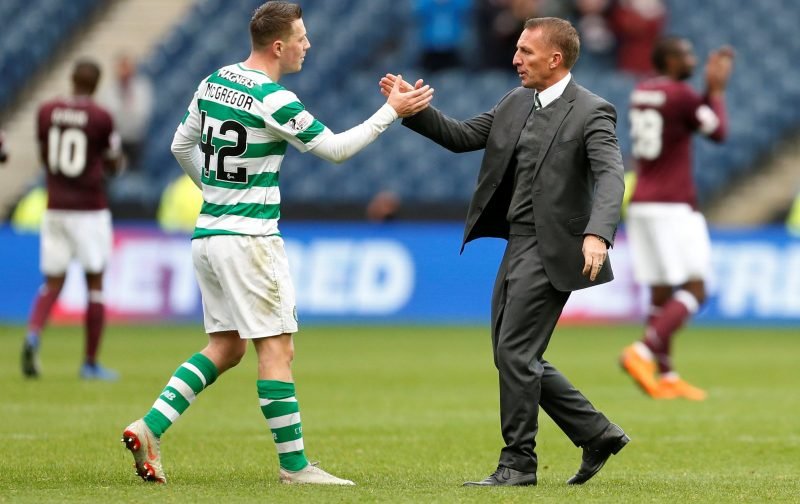 There’s no doubting that Craig Levein’s side capitalised well on the Hoops’ slow start to the season, forging ahead at the top of the table, but Celtic are back and they made clear their intentions this afternoon.

A double from Odsonne Edouard alongside goals from Filip Benkovic, James Forrest and Ryan Christie provided the victory, which puts Brendan Rodgers’ side just one point behind the Edinburgh side with a game in hand.

It was a superb afternoon with plenty of big performances, but it was midfielder Callum McGregor who caught the eye of most supporters.

His dominating midfield display had Hearts on the back-foot throughout, looking every bit the long-term replacement for Scott Brown many have touted him as. With performances like this, he might even be an upgrade.

The homegrown talent had fans buzzing, with many taking to Twitter to share their thoughts on his performance…

Callum McGregor is the footballer’s footballer. A fucking delight, no limits to his ability and versatility. Shine on Cal Mac, born to play for Celtic.

Callum McGregor is ten times the player Barry Ferguson was.

Callum McGregor must be the most complete footballer at Celtic right now, could put him in goals n he'd do u a turn… class ????

Callum Mcgregor puts performances in like that every week sitting in front of the back 4 and he wouldn’t look out of place playing for Man City????‍♂️

Callum McGregor is absolute caviar, been playing out his skin. Genuinely think he's going to be celtic and Scotland's most important player for a long, long time

Do you see Callum McGregor as Scott Brown’s long-term replacement in the Hoops midfield? Have your say in the comments below…