‘Shambolic’, ‘Horrendous’ – Celtic fans have had enough of Rodgers combination after draw 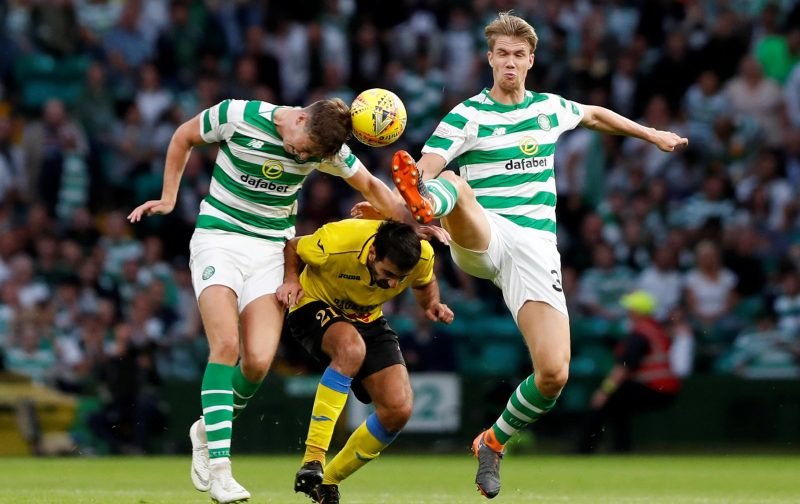 Celtic fans are losing patience with defenders Kristoffer Ajer and Jack Hendry after a disappointing draw at home to AEK Athens on Wednesday night.

The Hoops have it all to do in Greece next week after the 1-1 draw, failing to win despite Wednesday’s visitors going down to ten men early in the second half.

The Greeks’ goal means that the Hoops have to score in the second leg and produce the kind of defensive performance that is usually absent in away European fixtures.

Again it was the defence at the heart of fans’ concerns last night, with many struggling to comprehend why Brendan Rodgers is persisting with Jack Hendry and Kristoffer Ajer as the team’s main defensive combination.

Many deem the former not good enough and the latter not quite experienced enough to shine in matches of such importance.

It’s clear that the Hoops boss sees the duo as the future of the Celtic defence, but more and more fans seem less convinced.

Europa League for us this season. Not good enough all over the park. Couldn’t break them down when they went to 10 men. Ajer had a nightmare. Hendry is a Dundee player at best.

Ajer and Hendry all over the place there. Horrendous defending

Lost count of the amount of silly goals Celtic lose in Europe. Ajer was shambolic in his defending all night and Hendry looks shot to pieces. Defensively just not good enough at that level.

Good to see Ajer stand up for Hendry tonight and be equally as shite.

The Hendry experiment is over. Lustig,god love him,is past his best and Ajer is far too inexperienced to lead that defensive line.We’ll struggle to qualify now and if Rodgers doesn’t get backed then he’ll be away at the end of the season and we’ll take a huge step in all areas

Do you think Celtic need defensive improvements before the end of August? Let us know in the comments…