‘The scapegoat’, ‘Deserves credit’ – Many Celtic fans back Rodgers signing despite criticism 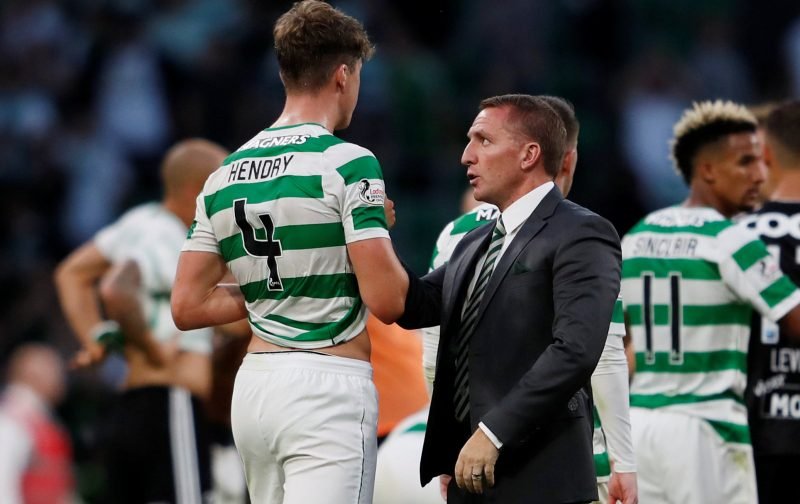 Celtic fans have been rushing to the defence of 23-year-old Jack Hendry over the last 24 hours, after being impressed by his performance against Rosenborg in UEFA Champions League qualifying.

The Hoops have progressed into the next round after a 0-0 draw in Norway, enough to see them through after their 3-1 victory in the first leg at Celtic Park.

Jack Hendry was at the heart of the defensive display, clearing most balls that came to him in the box and foiling the Norwegian’s attacking line.

The 23-year-old has received plenty of criticism since signing from the club from Dundee in January, with many unfairly suggesting that he isn’t good enough to play for the Hoops.

It’s far too early to make a decisive judgement on the player and so far this summer he has helped keep vital clean sheets in Europe.

Many fans feel has been made a scapegoat by some and are determined to change the narrative on his early Celtic career, taking to Twitter to praise him for his performance last night…

Had a wee shake at the start then grew into the game. The bhoy was cleaning up for Ajer most of the second half

People should start looking at the positives in Jack Hendry instead of being on his case for the least wee thing. Done a lot of good stuff last night.

Guy just needs time. Pleased for him tonight, too many ready to make him the scapegoat, like Boyata, McGregor and Forres before him..

Guy got slaughtered on here last week, made a mistake and got punished seems like some people can't wait to come on and greet about things. Shortfukinmemories me think HH

What do you think of Jack Hendry’s development so far? Let us know in the comments…